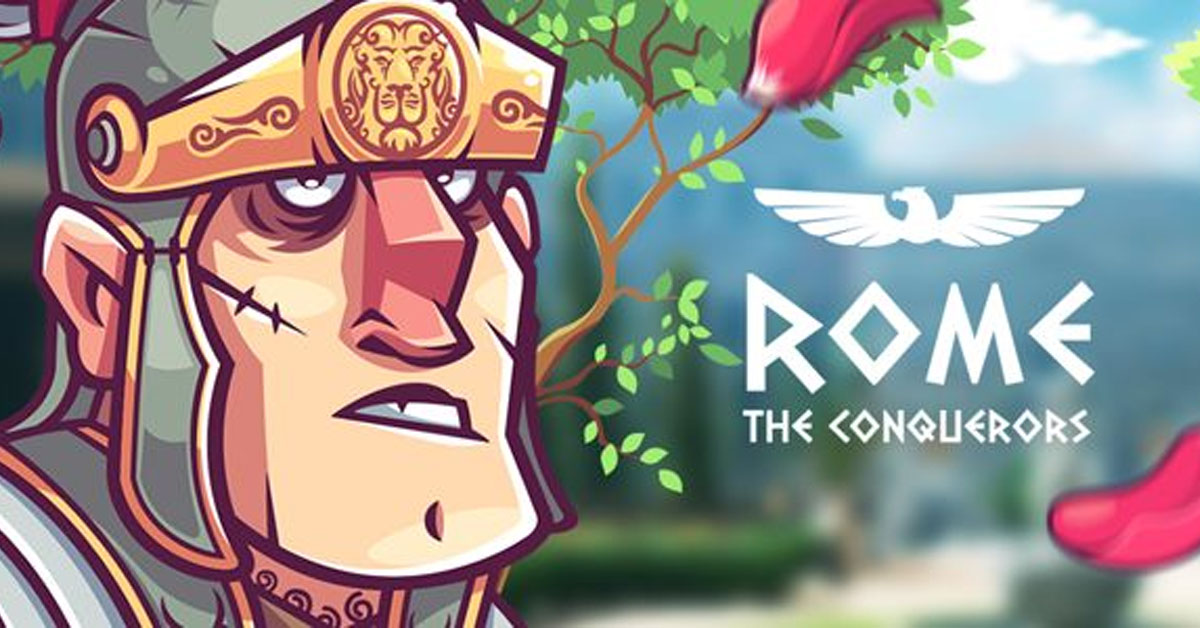 Peter and Sons is an ambitious new game studio based in Malta and their ambition shines through in Rome the Conquerors slot. This slot with a Roman theme is set in 410AD when Roman Empire was being increasingly threatened by the fearsome Germanic tribe, the Goths who were being lead by King Alaric.

In August of that year these fierce warriors sacked Rome while the Roman emperor at the time, Emperor Honorius was forced to flee and seek refuge in the city of Ravenna.

Peter and Sons transports you back to this historical event in Rome the Conquerors and uses their classic comic book style of animation to lighten up your mood and add a cheerful vibe which seems to be an almost trademarkable quality to this game studio that released its first slot in 2019.

You can play Rome the Conquerors slot for free from Canada in the demo play without registering with any of these casinos. If you choose to play Vikings video slot with real money you can get free spins without deposit in these casinos:

The minimum bet amount per spin in Rome The Conquerors is 0.10 credits and the maximum amount you can bet per spin is 10 credits which might seem a bit low to players who like to place big bets.

Rome The Conquerors by Peter and Sons does not have any paylines and instead has win ways. You start off with 1024 win ways but this can increase up to 7776 win lines.

Rome The Conquerors is certainly not your run of the mill slot when it comes to features. We were thoroughly impressed by the features in this slot and have mentioned them below:

In the base game you start off with 5 reels and 4 rows. Wilds can pop up on the 2nd,3rd and 4th reels on your screen respectively. Each will also award you a mystery multiplier and multiply your winnings on that spin with that multiplier.

Rome the Conquerors Free spins Round

If you manage to spin at least 2 scatters in the base game you can trigger the free spins round in Rome the Conquerors slot. Keep in mind that scatters only appear on the first and the fifth reels.

When you unlock the free spins game one more row is added to your screen the layout of the game becomes 5×5.If you collect scatters during this round it unlocks a tier level. Each tier level will fetch you 5 free spins and the higher tier level you have, the higher multipliers you will get with every wild symbol.

Rome the Conquerors is probably the first slot we have come across that features super free spins.

In super free spins 2 rows are added to make the layout of your reels a 5×6 layout and the win lines increase to 7776 win ways from the 1024 win ways in the base game.

The rest of the mechanics are the same as the free spins.

When it comes to online slots Rome the Conquerors is a breath of fresh air. We were thoroughly impressed by its animation style and unique features and have decided to give it a slot 4.5 out of 5.

Claim Bonus!
We use cookies on our website to give you the most relevant experience by remembering your preferences and repeat visits. By clicking “Accept”, you consent to the use of ALL the cookies.
Cookie settingsACCEPT
Manage consent

This website uses cookies to improve your experience while you navigate through the website. Out of these, the cookies that are categorized as necessary are stored on your browser as they are essential for the working of basic functionalities of the website. We also use third-party cookies that help us analyze and understand how you use this website. These cookies will be stored in your browser only with your consent. You also have the option to opt-out of these cookies. But opting out of some of these cookies may affect your browsing experience.
Necessary Always Enabled

Any cookies that may not be particularly necessary for the website to function and is used specifically to collect user personal data via analytics, ads, other embedded contents are termed as non-necessary cookies. It is mandatory to procure user consent prior to running these cookies on your website.